In the evening of Monday, 29 November, President Guy Parmelin welcomed Kazakh president Kassym-Jomart Tokayev to Geneva. At their meeting, two agreements fostering trade between Switzerland and Kazakhstan were signed. Official talks centred on economic relations, cooperation between the two countries in international organisations and global issues.

On Friday, 26 November, President Guy Parmelin and Vietnamese President Nguyễn Xuân Phúc met at Lohn Manor where they commended the close ties that have developed between Switzerland and Vietnam since diplomatic relations were established 50 years ago. Both sides stressed their intention to further deepen relations in the coming years.

President Guy Parmelin represented Switzerland at the World Leaders Summit at the UN Climate Change Conference COP26 in Glasgow (UK). He stressed that current efforts to limit global warming to a maximum increase of 1.5 degrees, as required by the Paris Agreement, fall far short of the mark. The last remaining rules for implementing the Paris Climate Agreement adopted in 2015 are to be decided at COP26.

On Thursday, 28 October, President Guy Parmelin met with the respective presidents and government representatives of Israel and the occupied Palestinian territory. The talks focused in particular on bilateral cooperation in economic and science matters, and on Switzerland's peace promotion efforts. Cooperation in innovation promotion was also discussed in Israel, while in the occupied Palestinian territory the creation of jobs for young people was a central topic.

On 15 October, President Guy Parmelin and Federal Councillor Ignazio Cassis, head of the Federal Department of Foreign Affairs (FDFA), welcomed Georgian President Salome Zourabichvili at the Lohn Manor. This was the first official visit by a Georgian president to Switzerland.

On Tuesday, 12 October, President Guy Parmelin attended the G20 Ministerial Meeting on trade and investment in Sorrento, Italy. Against the backdrop of the economic and health crisis related to COVID-19, ministers agreed to strengthen the rules-based multilateral trading system for a resilient, strong, sustainable and inclusive economic recovery and to mitigate the impact of the pandemic on international trade and investment. 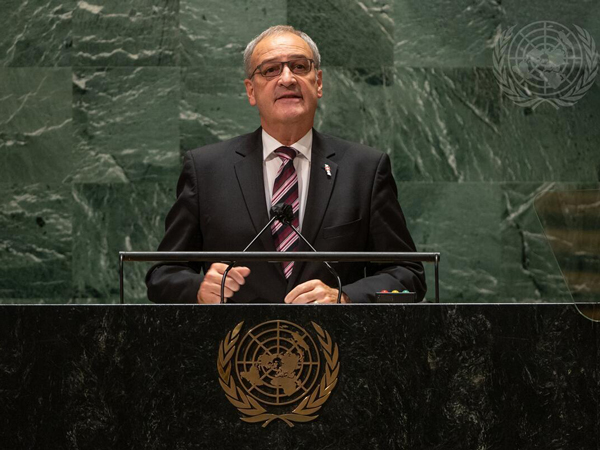 Speech of the President of the Confederation at the UN General Assembly.

The UNGA's 76th session officially began on 14 September 2021 and will continue for one year. The high-level opening of the new UNGA is taking place from 20 to 24 September. Last year's opening was carried out entirely online; this year, several face-to-face meetings will be possible again. Switzerland will be represented at the high-level opening of the UN General Assembly in New York by President of the Confederation Parmelin and Federal Councillor Cassis, head of the FDFA.

Switzerland’s three priorities for the UN General Assembly 76th session are the following:

Switzerland will continue to work on all UN-related themes in addition to these three priorities so as to ensure that Swiss interests remain safeguarded. These topics include in particular the commitment to international law and specifically human rights as well as international humanitarian law, humanitarian affairs and sustainability and disarmament issues. Switzerland will also continue to play an active role in the ongoing UN reform process and in safeguarding the interests of International Geneva. All activities carried out by Switzerland are based on its foreign policy strategies, dispatches and guidelines.

President Guy Parmelin, the head of the Federal Department of Economic Affairs, Education and Research (EAER), held an online roundtable discussion with the Secretary-General of the Association of Southeast Asian Nations (ASEAN) and several economic affairs ministers from the association’s member states. The dialogue was used to identify potential areas for economic cooperation.

On Thursday, 9 September, the Romanian president Klaus Iohannis met with President Guy Parmelin during an official visit to Switzerland. The discussions at Lohn Manor were also attended by Federal Councillor Ignazio Cassis, head of the Federal Department of Foreign Affairs (FDFA), and Romanian Foreign Minister Bogdan Aurescu. The talks focused on economic and scientific cooperation, the European policies of both countries and international security issues.

On Saturday, 24 July, following the opening ceremony of the Olympic Games in Tokyo, Swiss president Guy Parmelin met Japanese prime minister Yoshihide Suga. Their talks focused on the close cooperation between Japan and Switzerland in trade and research, as well as on global issues. They also announced the opening of a new consulate in Osaka, which will also include a new swissnex location. This is the sixth location of the Swiss network for education, research and innovation.

Delegations from Switzerland and the US had met the previous day to discuss strengthening economic relations and cooperation on education and research. Switzerland’s good offices were also a focus of the talks.

Innovation, education, the economy and good offices at the centre of USA-Switzerland talks in Geneva

President Guy Parmelin was received by King Carl XVI Gustaf at the start of his visit to Sweden on Monday, 14 June 2021. He then met separately with Prime Minister Stefan Löfven, Minister for Business, Industry and Innovation Ibrahim Baylan and Minister for Higher Education and Research Matilda Ernkrans, and paid a courtesy visit to Speaker of the Riksdag Andreas Norlén. The innovation agencies of Switzerland and Sweden signed a memorandum of understanding to further deepen their cooperation, which has been ongoing since 2013.

President Guy Parmelin paid a visit to the Vatican, where he met with Pope Francis and Cardinal Secretary of State Pietro Parolin, and attended the swearing-in ceremony of the new recruits of the Pontifical Swiss Guard.

On 23 April 2021, the President of the Swiss Confederation and Head of the Federal Department of Economic Affairs, Education and Research, Guy Parmelin, travelled to Brussels for a meeting with Ursula von der Leyen, President of the European Commission.

Press conference of the President of the Swiss Confederation

Excellencies, Ladies and Gentlemen, 2020 was a year to forget – and a year we will never forget. We have all learned a lot in the past months: about ourselves, the people around us, our countries, and the world we share. The pandemic has caused untold suffering, plunged numerous families and friends into mourning and devastated social life...

To the New Year's message for the diplomatic corps

Guy Parmelin elected President of the Swiss Confederation for 2021

Switzerland's true strength lies in its cohesion! Those were the words of the President of the Swiss Confederation for 2021 as he addressed the Federal Assembly a few minutes after his election. The motto of the newly elected president is clear: We are stronger together. In these particularly turbulent times, cohesion is essential, he said in his acceptance speech. We all face the same challenges.